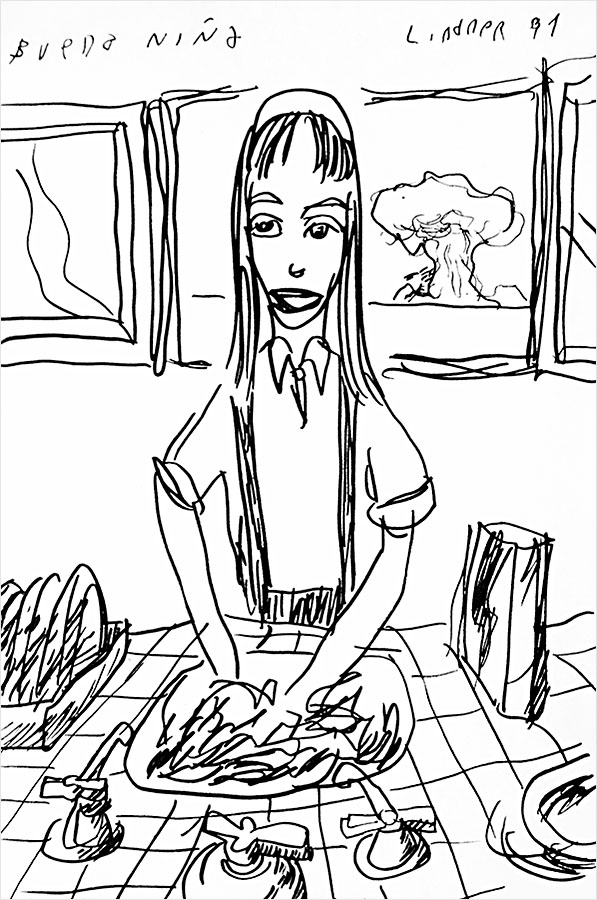 An avid reader and music lover, he is, thanks to his vast intellectual curiosity, a connoisseur of Argentine literature and history. He is one of the most insightful and original thinkers on the local scene. His singular and often jarring perspective on Argentine society and culture is always backed up by extensive reading and steeped in his odd sense of humor. While his work encompasses painting and animation—and even books and plays—drawing is his primary medium: he draws constantly, often in parallel with other practices. Lindner’s art makes clever reference to many drawing traditions and styles: technical drawings in ink, drawings with expressive lines, and colored-pencil illustrations. While at first glance his works seem fantastic or even surrealist, they are in fact highly codified with layers of references to political and historical events, pop culture, opera, and sports. Lindner began showing his work at Bolivia bar, the Centro Cultural Recoleta, and the gallery of the Centro Cultural Rojas in the nineties—a period key to the development of contemporary art from Buenos Aires. His work has been featured in solo and group shows in Latin America and Europe. He participated in the 2007 edition of the Mercosur Biennial and in the 2013 edition of the Istanbul Biennial. He has been awarded the Fundación Klemm and the Konex prizes, among other distinctions. In 2012, the Museo de Arte Latinoamericano de Buenos Aires (MALBA) brought into its collection one hundred and sixty-eight drawings he produced from 1985 to 2012.