The Avatars of Art

Scroll down for full translation of the text 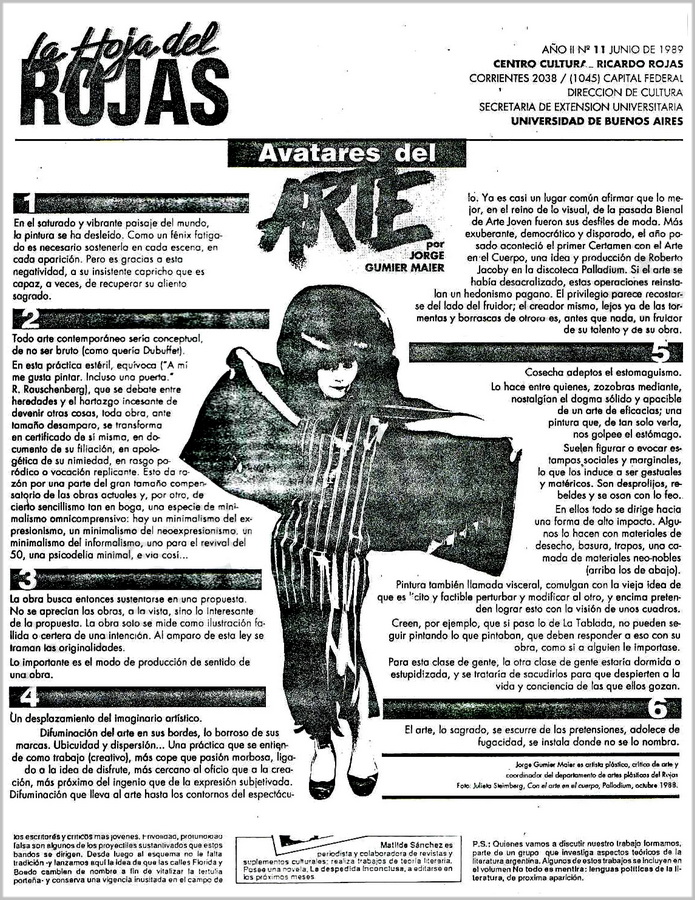 THE AVATARS OF ART

Painting has dissolved in the world’s saturated and vibrant landscape. Like an exhausted phoenix, it must be propped up in every scene, at every appearance. But it is thanks to that very negativity, to that dogged whim, that painting is capable—sometimes—of recovering its sacred breath.

All contemporary art is conceptual, unless it is marginal (as Dubuffet would have it). In that sterile, misguided practice (“I like painting, even a door,” R. Rauschenberg), in that struggle between legacies and becoming—relentlessly, ad nauseam—something else, all work turns into a certificate of itself, a membership card, an apologetics of its pettiness, a parody or retort—after all, what choice does it have, utterly defenseless as it is? That explains, on the one hand, the compensatory size of current works and, on the other, the simplicity that is now fashionable, a sort of all-encompassing minimalism: there is expressionist minimalism, neo-expressionist minimalism, informalist minimalism, a fifties-revival minimalism, a psychedelic minimalism, and via cosí…

The work of art, then, must be based on a proposal. Works are not what matter, it appears, but how interesting their proposals are. The work is only assessed as a flawed or accurate illustration of an intention. Under the protection of that law, originalities take shape.

What matters is how a work produces meaning.

Its displacement of the artistic imaginary.

The blurring of art at its edges, the fuzziness of its marks. Ubiquity and dispersion … A practice that considers itself (creative) work, more amusement than sickly passion, tied to an idea of enjoyment that is closer to craft than to creation, more akin to ingenuity than to subjective expression.

That blurring takes art to the limits of spectacle. It is almost a commonplace to state that, in the kingdom of the visual, the highlights of the last edition of the Bienal de Arte Joven were the fashion shows. Still more exuberant, democratic, and zany was the First Competition with Art in the Body held last year (Roberto Jacoby came up with the idea and produced the event at Palladium discotheque). If art had been desacralized, these operations restored its pagan hedonism. Privilege seems to lie squarely on the side of the reveler; far from the torments and storms of yesteryear, the creator him or herself is the one who delights in his and her talent and art.

It gathers followers of gut-ism.

It is made by those who, after much fretting, nostalgically pine for the solid and placid dogma of an efficacious art, painting that delivers a blow straight to the gut as soon as we see it.

They usually depict or evoke social situations or images of marginality, for which they resort to the gesture and heavy use of material. They are sloppy, rebellious, and make flagrant use of the ugly.

Everything is geared to maximize impact. Some achieve this by using waste, trash, rags, a whole batch (from top to bottom) of neo-noble materials

Also called visceral painting, it agrees with the old idea that it is fair and feasible to disturb and change others, and even to attempt to do so by showing them a few paintings-

They believe, for instance, that after what happened at La Tablada* they cannot keep painting what they had been painting, that they must react to it in their art—as if anyone cared.

For people of that sort, people of the other sort are numb or stupefied—they must be shaken up and brought back to the life and consciousness that they enjoy.

*In January 1989, members of the armed leftist organization Movimiento Todos por la Patria stormed an army garrison in the town of La Tablada on the outskirts of Buenos Aires. The clash left many dead and wounded on both sides, and resulted in human rights abuses. The incident was emblematic of the political instability that riddled the administration of Raúl Alfonsín (1983-1989), the first democratically elected president after years of dictatorship. It attested to the ongoing brutality at the hands of the Argentine armed forces.